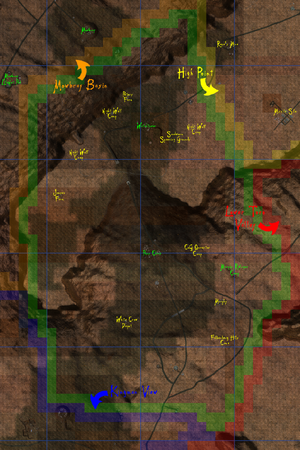 Ascendant Ridge is considered the boundary between the lower and upper Plateau. The town of Pass Chris maintains the tunnel that leads up to Watchtower, but has recently been flooded with refugees from the town of Murphy. Murphy has been overrun by a gang called the Night Wolves and many of its former-residents have fled to either Pass Chris or to a small refugee camp north of the town. Atop the Plateau lies an old GlobalTech armory which the Enforcers and townspeople now simply call Watchtower.

A small area located northwest of Pass Chris, where the Brutal Throwback Hunters are wandering around.

With the town of Murphy having been overrun by the Night Wolves, the townspeople have mostly fled to this small refugee camp north of the town.

A sub-group of CoG's called the Quaestors have a small camp east of Pass Chris.

The town of Murphy has been taken over by a raider group called the Night Wolves, but many of the former residents in the nearby refugee camp are willing to pay a clone well to assist them in taking it back.

The Falkenberg Hills were owned by the Falkenberg family in Murphy till they were driven out to the refugee camp. Now the cave within these hills are filled with not only the poisonous creepers, but Night Wovles who've decided to establish a camp at the mouth.

The White Crow have a small depot camp south of Pass Chris. The Enforcer Sheriff of Pass Chris is willing to pay a clone to help investigate their activities.

The Jensen family own a large sheep farm taking up most of the southwest plateau peninsula. Here it's rumored that a beast called the Chupacabra exists.

Peters Farm is a small farm located northwest of Watchtower, and is where a notorious Night Wolf named Mayhem resides.

The sandworms wrecking havoc on the town of Watchtower are believed to have a small spawning ground east of town.