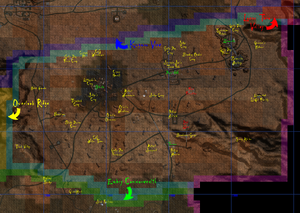 The Central Plains is a flat dusty land in the lower Plateau, but is home to one of the most technologically valuable towns in the sector, Oilville. Made up from an old oil refinery, Oilville is run primarily by the Techs, but other factions have also made a living in the town. East of Oilville lies an old train depot called Depot 66 which is run by Travelers, and even further east lies an Enforcer ruled base called Zanesville. Near the southern end of the county lies a small Tech town called Terance, where the townspeople have been having trouble with a recently excavated LifeNet facility gone haywire.

The area directly in front of the gates of Oilville, where the Town Event takes place.

Boomtown appears to be a branch facility to Oilville, but has been taken over by Underdwellers.

Brenhauer Gorge is located just next to the town of Terance, and a few merchants have decided to sell their wares here outside of the town.

The Gully Dog Camp north of Depot 66 is home to, well, Gully Dogs. And a cave filled with scorpions.

Guzman has built a small hideout east of Zanesville.

Casta Gaunt's Raiders have taken control of this small hotel with a non-functioning LifeNet Facility within its premises.

Just southwest of Oilville, the townspeople have been having difficulties with Judges making a camp and causing issues for those who wish to support the town's initiatives.

A troublemaker for the Franklin's Riders, Littlejohn has established this small camp with his thugs. Speak to the local Franklin's Riders representative and they may be willing to pay you to be rid of the pest.

The mutant junkyard is home to many mutants and their blight wolf pets.

Once the home of a wealthy man, this mansion is now taken by local Gully Dogs.

Rotter-infested area in the eastern part of Terance

The Zanesville Airstrip is of vital importance to the Enforcers in nearby Zanesville, but it's currently been overrun with Travelers who are not willing to share.

Like the Trash Valley near Clinton FARM, this valley is also filled with sometimes valuable refuse. But among this refuse are creepers and cockroaches that will give any clone reason to be wary.

High atop a bluff near Oilville lies a remarkably resourceful hermit who seems to have more than a few screws loose. Clones wishing to stop this raving lunatic should beware his pet, Death Biter, who is located just below.

This warehouse outside of Oilville is where the local mutants and their blight wolves have taken residence.

The Gully Dogs have built a rather defensible fortress south of Oilville.

The overpass south of Oilville is left in disrepair while Bridge Lurkers have taken to robbing would be travelers from Embry Crossroads.

Southeast of Oilville lies a wind farm that's been overrun with CoGs.

Large camp of the Gully Dogs northwest of Oilville.

A warehouse north-west of Oilville, used by the CoGs.

The area northwest of Oilville, where Sandworms and Ants are housing.