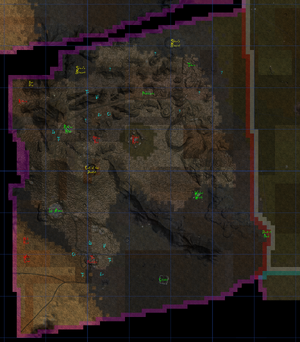 Deadfall (by now also known as Northern Deadfall) is the zone to the west-southwest of Kaibab Forest (Sector 3). It can be reached by following the road west from Gaia or Haietta and continuing straight west (off the road) when the road takes a sharp turn to the north.

Deadfall is inteded for player characters from levels 45-50 and typically begins in the town of Deadfall Point.

The capital city of Los Alamos offers access to Sector, Barter, VIP and Utility vaults; as well as a myriad of crafting material vendors, craft trainers and skill vendors. However some skill books are notably absent, such as Group Tactics, Social and lower level First Aid.

All towns in this sector are faction neutral with the exception of Tabara which will be hostile to players that do not have sufficient Shiva's Favored faction.