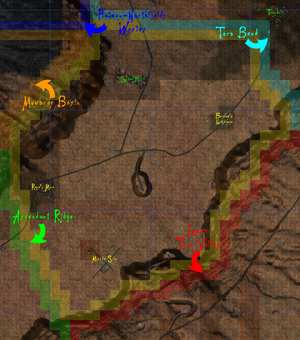 High Point is one of the last counties a clone will pass through in the Plateau. Two of the major towns, Barrow's Exchange and Reye's Mine, have been completely overtaken by Night Wolves. Near the southern cliffs lies an old missile silo that's been taken over by the crazy CoGs and a few of Shiva's Favored hoping to witness the nukes going off. Once called Park Hill, the residents have renamed the northern town Spider Hill after thousands of giant mutated spiders emerged when they tried to turn on the local power. They can use any help clones can offer, but you may need to bring a group for the many missions the residents offer.

This town near Trumbull has been completely overtaken by the Night Wolves and is best avoided, save by those who wish to scavenge for the valuable materials still available.

The CoGs have managed to enter the old Missile Silo and plan to set off the nuclear warheads within. The Shiva's Favored wait outside the structure hoping to witness the destruction of the human race. A small group of Enforcers hope to combat the CoGs and remain in the northeast section of the area while a few other people remain inside hoping for aid.

Like Barrow's Exchange, this old mining town has been overtaken by the Night Wolves. A resourceful clone may find it worth their while to infiltrate the old mine for valuable rewards and the rare item.