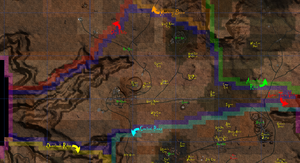 The prison facility overlooking Old Kingman is more a fortress nowadays. It's rumored that a man named Casta Gaunt rules the prison and is having his raiders and the White Crow supply him with old LifeNet parts from around the sector in order to try and make himself an immortal clone.

A base camp of Gaunt's Raiders and their White Crow backup outside of Old Kingman.

An abandoned quarry east of Linewood is infested with numerous large creepers, and there have also been sightings of a particular "Giant" creeper wandering the area.

East of Linewood lies a furrowed piece of land where scorpions gather and nest. Clones should be wary of the area as there's a particularly infamous scorpion nicknamed "Pinchy" by the locals.

This ridge north of Linewood offers a spectacular view of both Linewood and Needle Eye. The solitary tower located within its small fenced enclosure reveals a nice, but distant overview of Kingman Prison.