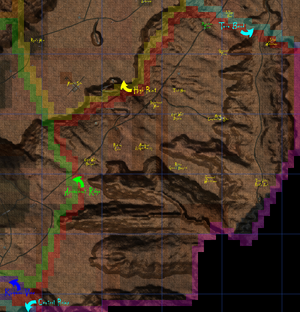 Lower Toro Valley is home to a long stretch of the Toro Road between Murphy and Murder Hole. There a a couple mines that can be found along this roadway, as well as a couple farms. To the southeast lies a town that was called Road's End (not to be confused with Road's End in the Plateau-Northfields Wastes) which is now overrun by Throwbacks, and clones fight each other for whatever scraps remain. Near this area lies an old hospital that's been overtaken by rotters and is often called Rotter General Hospital by the wastelanders

No merchants or trainers, but there are guards and quest givers

The impertinent mine is a small mine controlled by Night Wolves, but deep inside one may find Underdwellers and Scorpions.

The Night wolves control a small digsite south of the county's only working LifeNet facilty.

This hospital appears to have once serviced the region, but is now flooded with giant cockroaches and rotters. It's rumored that there are still valuable medical supplies hidden inside.

The Survivalists have taken over a ruined mining town just south of the High Point detour road. This cave/mine is filled with valuable goods, but a clone should still be wary of the dangers inside.

The Geaumonts live on a small farm south of the Dunsinane Tunnel and have been feuding with the LeTupac family who live just across the border in Toro Bend.