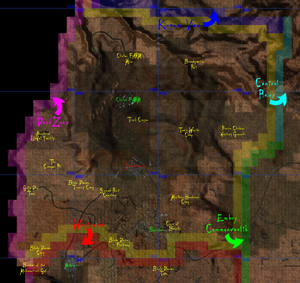 Overlook Ridge is one of the first counties where a clone may find him or her self. Clinton FARM controls the northern half of the county, but is having issues with Blade Dancers gaining a foothold and transporting toxic waste from the mine east into the Embry Commonwealth. Boneclaw along the southern county line is recovering from an attack by Masters and attacks from Blade Dancers who've established a nearby fortress.

Nesting Creepers have formed a nest in this pit, which a daring clone may venture order to obtain the Globaltech Crate hidden in the center.

The Blade Dancers established this camp south of Clinton FARM to train their recruits. If you are daring, you may wish to brave through their ranks to obtain the Globaltech Crate(s) the Blade Dancers have stashed within its grounds.

Brambywatch Post is likely named after the Bramby family of Clinton FARM who also own the mine. The post is currently under the control of enemies to Clinton FARM, but the Globaltech Crate stashed within may bring the unwanted attention of clones.

Scavengers have taken to looting the dead in this cemetery. A clone may wish to do the same, or at least attempt to steal the Globaltech Crate(s) hidden in the dilapidated church.

Although Prairie Chickens are found all around Overlook Ridge, the nesting grounds are a strong concentration of their herds with very little other wildlife to get in the way of hunting.

This camp is a base of operations for Masters' Henchmen who are working to finish Masters' genocide of Boneclaw's inhabitants. The henchmen are well trained and geared, so a clone may wish to group with others before attempting an attack.

Blade Dancers have established this camp for their toxic waste transportation. Many of the Blade Dancers have received toxic exposure to the waste and are more than willing to share it with any clones that may interfere with their operation.

The Gully Dogs have taken over a small town northwest of Midway and near the southwest edge of county.

Clinton FARM's mine is overrun by Blade Dancers who are recklessly transporting toxic waste stored within to someplace east into Embry Crossroads. Their mishandling of the dangerous material is putting Clinton FARM itself at risk.

Trash Valley is where residents of Clinton FARM and the Scavengers south of town have tossed their refuse, but now realize that many things can be recovered and used for rebuilding their lives. Snakes, Ants, and Lizards have taken residence in the valley, and if lucky a clone may find a well known plateau lizard by the name of Ol'Painless.

A Fortress of the Blade Dancers around Dirk.