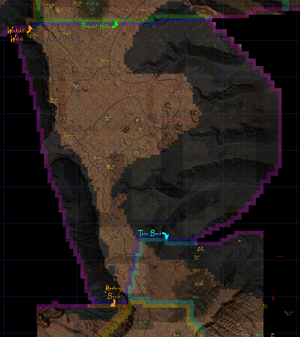 The Plateau-Northfields Wastes is less a county than the wasted wastelands lying between the Plateau and Northfields sectors. The region is expansive and mostly hostile, save for a lone outpost run by the Bankers and Franklin's Riders.

An abandoned town between Spider Hill and Sunshine Corners, populated by Infected.

Road's End was once a town near the northern end of the region, but its townspeople have been slaughtered by Shiva's Favored. A few residents fled just south of the town and are desperately seeking help.

Not much is known about this place, and hopefully more light will be shed upon it later, however the guards are all extremely high-level.

Once known as the Lyon's Estates, this town is filled with zombie-like rotters. It's rumored that a hulking rotter in town wields a specially crafted rifle named "Suzette".

The overlook over Sunshine Canyon is infested with giant scorpions. There was a bridge that spanned the length of this once-famous canyon, but no longer. Near the ruined bridge east along the road lies a few stranded travelers in need of aid.

Southwest of Sunshine Corners, this town is overrun with rotters.