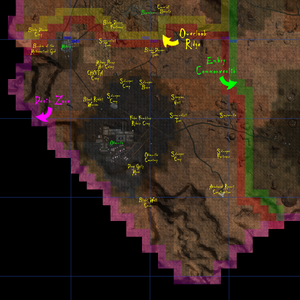 Westreach is one of the early counties a clone will likely find his or her self. In the northwest lies Midway, a town run by two competing Traveler families, the Burnses and the Kellers. Choosing sides does not matter in the long run, but you must choose a side before either family will reward you. Further to the south lies Odenville. The Deep Gully Mine yields coal for this and several other counties, but recently has become infested with zombie-like beings the townspeople call Diggers.

Simsonville was overrun by Throwbacks who've forced those who survived to a small building south of its entrance. Clones may wish to see if the ex-residents of the town would be willing to reward anyone who can help them be rid of this menace, but be warned these Throwbacks are unusually tough and may require a posse to dispose of.

Just west of Midway lies this old bunker where the Found have made a home and named the Bunker of the Mathematical God. These Found (especially their leader, Mother Board) are beginning to become a problem for the townspeople of Midway.

Several thugs have taken to impersonating the Franklin's Riders and giving the neutral faction a bad reputation. The real Franklin's Riders are looking for aid from whoever is willing to help them clear their name, and willign to reward handsomely for it.

The Salvagers have built a highly defended fortress in the southeast section of the county, just south of Simsonville. Although intimidating, a well prepared clone may wish to venture into this fortress for the chance at a Globaltech Crate.

An abandoned resort southeast of Odenville, where you can find about 10 nodes of Junked Wood - good chance to get Salvaged Wood!

Grave Robbers have recently began to rob the graves of Odenville's dead.

Freakishly large rabbits have overpopulated the fields northwest of Odenville. The local farming community may pay a clone well for thinning this over-population of bunnies.

A nest of Plateau Scorpions have infested a small canyon northeast of Odenville. Be warned that the Scorpions here are numerous and can inflict heavy doses of poison. One may even need a group in order to kill the largest of the nest's denizens.

The most heavily fortified of the Salvager camps, this base is walled and heavily populated by the Salvagers.

Salvagers have made several camps north of Odenville.

Survivalists have taken over several smaller towns in Westreach, and in particular a small town east of Midway and another northeast of Odenville.

In the center of the Midway Plains lies a colony of ants. Although wastelanders generally avoid this area, an adventurous clone may wish to form a group to kill the queen of this colony.