Bound to be Trouble
Goal:

Mission:
Specialist Reed has sent you into the Earthbound caverns to smash the Disruptor Machine and retrieve an item called the Central Emitter that will be well protected.
850 Chips

Specialist Reed
Efforts against the Earthbound have been ongoing throughout the sector. Maybe you've even been involved in some of the fights. It doesn't matter to me if you have. They've got some sort of machine in the caves here that we don't like. You need to smash it and bring back a piece called the Central Emitter.

If you actually accomplish this, Specialist Franklin here will make sure you're set up with some fancy new toys. Of course, my bet is that you run in there and die a few times, maybe a dozen, and then chickenshit out like the rest of the clones around here and run away.

What do you want the parts for?

I don't really feel like doing anything for you.

Specialist Reed
Not me who wants the parts. The Agency does. Don't matter to me why and shouldn't matter to you either. I'm not here to answer your questions. I just want to get this thing and get the hell out of this shit hole.

What is a Central Emitter?

Specialist Reed
Beats me. Supposedly you can identify it by the amount of noise it'll be making when it's connected to the power source. That's all they tell me.

I don't really feel like doing anything for you.

Specialist Reed
Thanks, I'll be collecting these items now.

Bound to be Trouble
Mission:
You did it. So this little piece of shit is what has the Agency so upset, huh? Maybe now I can get the hell out of here and go home. Be sure to ask Specialist Franklin for your new toys.
850 Chips 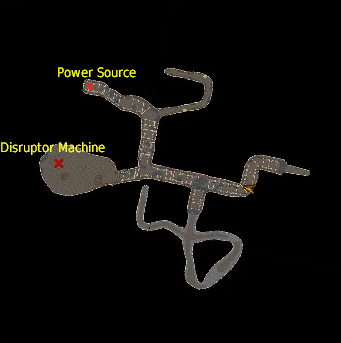 Find the cache in the Earthbound Retreat

Retrieved from "https://fallenearth.fandom.com/wiki/Mission:_Bound_to_be_Trouble?oldid=172597"
Community content is available under CC-BY-SA unless otherwise noted.