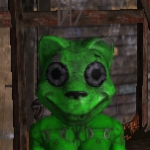 Miao! My main toon is Guinylen, a social crafter. If you see me in-game, be sure to say Miao!

A Little Background of Me

I started back in 2013, and being an achievement hunter, this game looked very appealing to me when I saw it on the Steam Store page. So I decided to give it a go, seeing that it had so many achievements.

I got into the game and played till I reached lv 10, at which point I lost interest in the game, as I focused too much on the impossibility of getting the achievements, or what to do in the game. And so I left. I've spent 2 years thereafter playing Dead Island: Epidemic.

When DI:E was shut down, for some reason I decided to give Fallen Earth another go. My whole experience was completely changed when I joined a lovely clan. Since 2015, I am still here.

I am glad to be here.

My next big projects

Since 31/7/2016, I have contributed to the following mission pages:

Guinylen
The one and only green pussy in Fallen Earth.
This item can not be destroyed

200
You're A Cat!
Awarded to anyone who has miao'ed at Guinylen.

Retrieved from "https://fallenearth.fandom.com/wiki/User:Guinylen?oldid=175818"
Community content is available under CC-BY-SA unless otherwise noted.